-
Molecular architecture and conservation of an immature human endogenous retrovirus

-
Fine structure and assembly pattern of a minimal myophage Pam3.

-
Myosin loop-4 is critical for optimal tropomyosin repositioning on actin during muscle activation and relaxation.

-
A molecular network of conserved factors keeps ribosomes dormant in the egg.

-
Structural basis for a conserved neutralization epitope on the receptor-binding domain of SARS-CoV-2.

-
Cryo-EM structure of the Mre11-Rad50-Nbs1 complex reveals the molecular mechanism of scaffolding functions.

-
Uphill energy transfer mechanism for photosynthesis in the Antarctic alga

-
Structures of human dynein in complex with the lissencephaly 1 protein, LIS1.

-
Polyribosomes of circular topology are prevalent in mammalian cells.

-
The molecular mechanism of sialic acid transport mediated by Sialin.

-
Structures and mechanisms of tRNA methylation by METTL1-WDR4.

wwPDB to switch to version 3 of the EMDB data model

The Nobel Prize in Physiology or Medicine 2021 - NobelPrize.org / 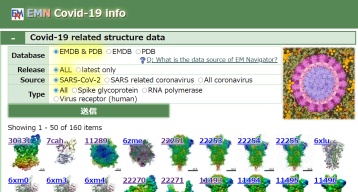 Molecule of the Month (242)：Coronavirus Proteases 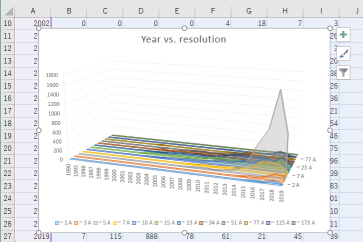 Some data of EM Navigator services can be downloaded as text file. Software such as Excel can load the data files.

Q: What are the data sources of EM Navigator? /